We’ve now had particle sensors both inside and outside the house for a long time, but for the first time we bought a large scale filter in one of the offices in the house.

This is probably good proof that the filter is working extremely well.

I’ve just built my first radiation counter for a Raspberry Pi – and intend to add this to the house monitoring system. At the moment it’s warming up – I will have further information soon.

But while I was waiting for it to warm up I found the following on another Radiation counter I may try to get hold of as well : 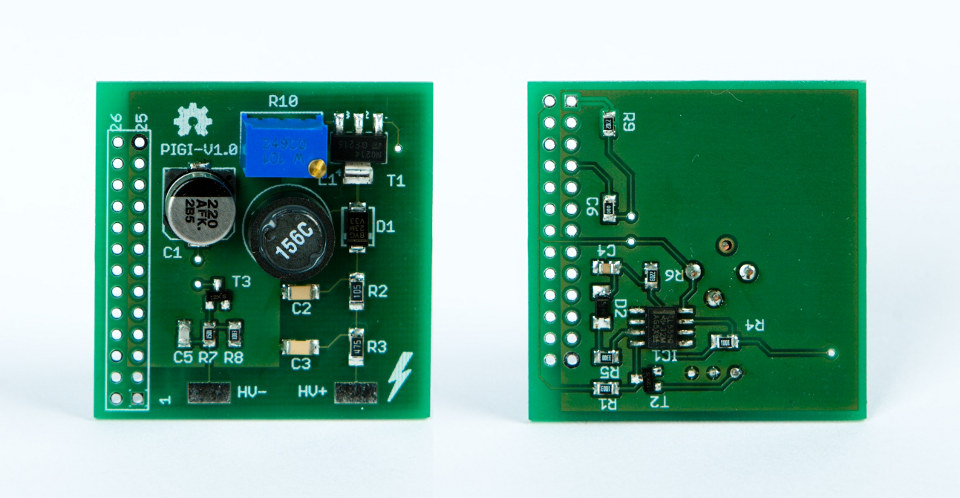 The Raspberry Pi is a perfect platform to be a cheap but very versatile geiger counter. It can be connected to a TV/Monitor to display a nice graphical interface, it can play the nostalgic tak, tak, taktaktak sound via audio output and it can also serve as an autonomous geiger counter sensor node (even solar powered) collecting and sharing real-time and historic data. All you need is:

The PiGI is designed & built as a simple open-source plug and play module for the Raspberry Pi to transform it into a cheap and hackable multi purpose geiger counter. It generates the necessary high voltage (up to 1000V) the GM tubes require to operate (typically 400-600V for beta/gamma GMTs).

Some pancake sensors (mostly used for alpha radiation) require an even higher voltage, theoretically the circuit should cover it. However, that’s untested, only a LND712 (new, see picture) and two old Phillips tubes (Frieseke&Hoepfner FHZ74/76) could be tested, due to limited prototyping resources.

For every impulse the geiger tube registers the PiGI pulls a GPIO Pin of the Pi to ground (falling edge detection). On the Pi runs just a little daemon called counterd which waits for an interrupt to register the count and notify the display/audio/data-storage/network handler. That’s why it can also easily be connected to any other embedded/micro controller system like:

HOWTOs can/will be provided, drop a comment if you need one for connections/pull-up configuration.

The outside sensor is quite far from the chimney – but it’s very clear.

Then from the indoor sensor – which is behind 2 closed doors – well away from the fireplace.

the other end of this board has a USB female socket – use a USB cable to connect this to the raspberry pi.

Interesting to see the level of CO2 in our library – where is also where the treadmill is.

The enormous peak is my 30 minutes run on the treadmill this morning – without the outside door to the garden being open. The fall was after I opened the door.

From the dust sensors today

As you can see – substantially higher readings outside than inside for most of the day, and my wife has terrible hay fever.

Btw. the spike on the right side of the graphs is me making egg and bacon with the outside door open.

The steep curve at the end of the day is from a meeting in our house – at a time of the year where the doors are not kept open. Or at last that’s what I assume.

btw. the family tells me that their hay fever has started – that could be what’s showing u in the outside dust sensor.

Dustsensor2 is outside – dust sensor1 is inside the house.

Now that we have a CO2 sensor in the house I wanted to find out Waterloo acceptable levels are, and of course I turned to Wikipedia first :

Indoor air quality – Wikipedia, the free encyclopedia: “To eliminate most complaints, the total indoor CO2 level should be reduced to a difference of less than 600 ppm above outdoor levels. The National Institute for Occupational Safety and Health (NIOSH) considers that indoor air concentrations of carbon dioxide that exceed 1,000 ppm are a marker suggesting inadequate ventilation.[20] The UK standards for schools say that carbon dioxide in all teaching and learning spaces, when measured at seated head height and averaged over the whole day should not exceed 1,500 ppm. The whole day refers to normal school hours (i.e. 9:00am to 3:30pm) and includes unoccupied periods such as lunch breaks. In Hong Kong, the EPD established indoor air quality objectives for office buildings and public places in which a carbon dioxide level below 1,000 ppm is considered to be good.[21] European standards limit carbon dioxide to 3,500 ppm. OSHA limits carbon dioxide concentration in the workplace to 5,000 ppm for prolonged periods, and 35,000 ppm for 15 minutes. These higher limits are concerned with avoiding loss of consciousness (fainting), and do not address impaired cognitive performance and energy, which begin to occur at lower concentrations of carbon dioxide.”

And I’ve got no idea why we have the elevated levels at around 09:00.